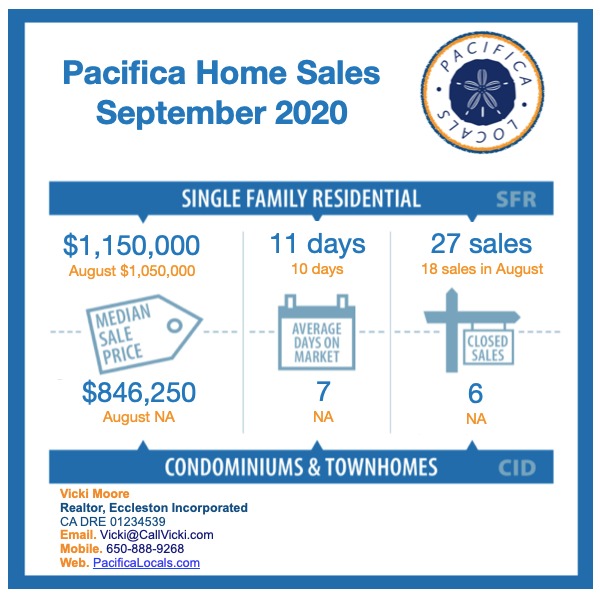 Looking back at the past three months – September, August, July – there’s no market trend indicated. In order to have a trend in the market, we need to see three months going in the same direction.

The median sale price has dipped slightly; the average sale price is up. The sale price to list price ratio is down but still over the asking price.

We’ll have to wait for the end of the month for a fair assessment of the current market. Looking at it microscopically is what we do on a daily basis when working with clients who are in the market to buy or sell at that particular time, but not super helpful in a larger perspective of what’s happening in the market. The most interesting aspect of what’s going on right now are the price reductions.

The Future of the Pacifica Real Estate Market

If I had a crystal ball, I could tell you exactly what’s going to happen.  Unfortunately, even the tarot card readers were wrong about 2020.

Experts, like the economist for the California Association of Realtors, Leslie Appleton Young, is telling us that low inventory will remain to plague the market keeping prices up.  However, buyers may get fatigued with those prices.  We could see prices come down some.

I did some research on the Pacifica real estate market during Presidential years.  Our multiple listing service online data only goes back to about 1999 so it definitely wasn’t comprehensive research.

I was reminded that there were other significant events during those years.  Differentiating between the remarkable events of those years, the presidential election and the fact that there were no major differences in market performance, I believe that the elections had little to no impact.

In September of that year, America came very close to total economic collapse.

A gunman opens fire at a midnight screening of “The Dark Knight Rises” in Aurora, Colorado, killing twelve and injuring fifty-eight people on July 20th.
The Summer Olympics are held in London, England from July 27th to August 12th.
The Mars Science Laboratory or “Curiosity Rover” successfully lands on Mars.
The Diamond Jubilee of Queen Elizabeth II celebrating the 60th anniversary of her ascension to the throne in 1952 takes place, with celebrations throughout the year in the United Kingdom and around the world.